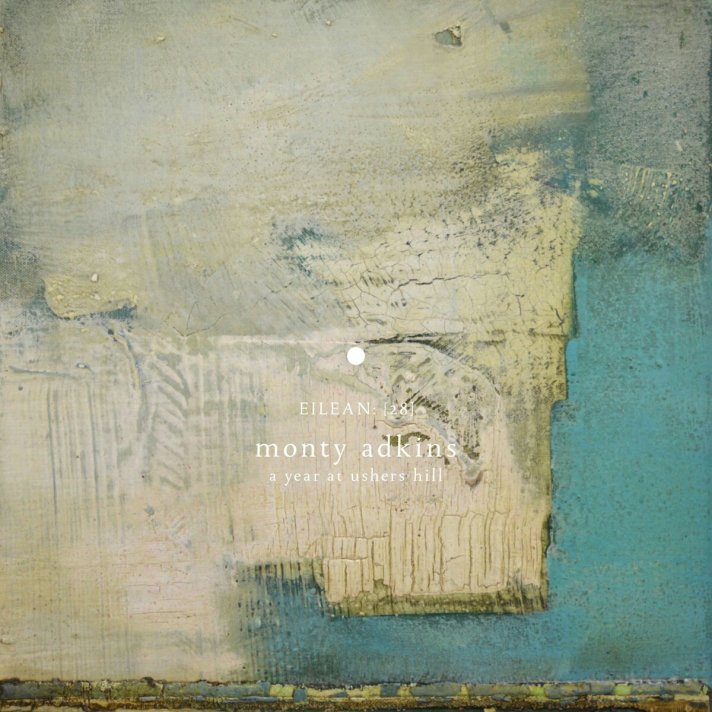 The 59th Eilean Rec release aka Eilean 28 is Monty Adkins’ ” A Year In Ushers Hill”. According to the label: “Monty Adkins is experimental sound artist based in remote countryside of the north of England.  Inhabiting a post-acousmatic sensibility, Monty’s work draws together elements from ambient, acousmatic and microsound music producing a soundworld characterised by slow shifting organic textures derived from processed instrumental sounds”

He has been releasing music since 2009 with the majority coming out on the Audiobulb and Crónica labels. “A Year at Usher Hill” is his sixth solo album with his last solo full length coming out in 2015. He also is a Professor at the University of Huddlesfield in the UK.

Usher’s Hill is possibly geographically fictitious as the only mention of a place with this name is in Queensland, Australia. According to the artist (via his own blog) “A year at Ushers Hill is the final part of a trilogy of releases – following on from Rift Patterns (Audiobulb) and Residual Forms (Cronica), based on psychogeography and psychosonolgy. The album was started in July 2016 and completed in July 2017 and is highly autobiographical, charting events, places, and most importantly the people associated with these experiences. For me, the process of creating this album was a re-discovery of memories and the connections between them across time. Composing became a reflective and meditative process: teasing out the meaning of events, celebrating the happenstance, and the pleasure of the moment”.

Psychogeography refers to the study of the effects of geographical environment on the emotions of individuals, while Psychosonology is more like a visual image that may be evoked by the music. You can read more from a publication by Adkins, et al here.

“A Year in Usher’s Hill” is a collaborative release as it features Jonathan Best on Pianos , while Adkins plays Celesta, Organs and Electronics. The mixing is by Monty Adkins and Steven Halliday and mastering by Mathias Van Eecloo.

“Alone” is solo piano which has a muted fog covered sound that has a nice reverb to it which extends the notes. The playing is rather minimal and feels improvised as it does not fall a similar pattern other than ending sections on long notes. The nature of the fog or haze to the track lends that nostalgic feel because it gives an impression of looking back in the mists of time.

“An Eden Within” long granulated drones build up in wind-swept fashion with electronics meeting organ with the delicate pinky plonk of the Celestia giving it an innocent feel. The drones and organ fill the sound and provides space for the Celesta to weave between, but also letting each element take over from time to time to be the focus. Some of the organ sounds give it a “Sorcerer” era Tangerine Dream feel with an ever so slightly proggy touch.

“Shifting Ground” sees the return of Best’s emotive piano playing with a gentle style that is fluid and intimate with a ‘in the room” recording style. You get the feeling of reminiscing and nostalgia from this piece.

“Small Steps” heavy bass notes and starker keys welcome the start if this piece. The Organ drones cone in which add to the feeling of other-worldliness. The Drones have a strong church-like feel which could be natural to the instrument. An alien feel arrives in the form of grainy electronics which support the feel of the organ.

“Radiant Moon” shows delicate interplay with dust-covered glitch loops and celestial chimes. Quite like transmissions from a far outpost of Antarctica.

“In Memorium Jacques Hamel” is a piece dedicated to the French Catholic priest killed in Normandy by terrorists. Naturally with a track that is a tribute to someone murdered in horrific circumstances there has to be delicateness to it. The solo piano is quite minimal in its sound with long emotive, with a tinge of melancholy, notes that fill out the sound as the notes spread our to nothing, much like water ripples on a pond.

“Usher’s Hill” again the electronics give a feeling of a lost transmission, but this time there is a creaking sound to them which lends a nautical feel to them. Bass thuds delineate swirls of organ drones that is layered and also forms part of the electronic experimentalism while Celesta augments the electronics.

“Before Sleep” is shorter track that is full of emotion with its tone of piano playing, the speed and style of playing. Maybe with such a title the feeling convey relaxation, but for me it is of loss or of something that cannot be changed and the emotions surrounding that.

“Solstice” takes us in the proggy style with floating lines, bass sections, bass thuds and occasional hammering of piano keys The track full of melody and experimental leaning musician it is quite rhythmical. Celesta runs almost mimic those of the organ which gives the track big an organic and electronic feel to it. Thus is teach quire different to those in the album and feels a bit out-of-place, but in a good way.

“Burnt Sun” the familiar instruments return with experimental electronics, drones, celesta combing to give an Electroacoustic piece that for all intents and purposes seems to be like a collection of various tones as opposed following a musical pattern. For that reason I can pass on a piece like this.

“Under a Luna Sky” Best’s piano playing comes to bring the album home with playing that is both urgent at times and relaxed at others. There is hint of melancholy, but not morose.It’s like a journey has been undertaken and the music is a reflection of that – some joy, some despair and something in between. Much like this album its many things all at once.

I admit that there are parts to this album that I don’t get. You can easily get bored with music when there is no variation. This is not the problem here, it’s that you are not sure what type of album you are getting – experimental, modern classical or proggy electronics. Sometimes they work together well like in “Small Steps” or when they go more genre specific such “Solstice” which is the album’s highlight, but I personally don’t feel that it works together as a whole.