Sontag Shogun and Moskitoo – The Things We Let Fall Apart / The Thunderswan.

Home Normal return to the vinyl format for the first time since 2013’s Fabio Orsi and Pimmon LP. This time around it is a collaborative 7″ by New York trio Sontag Shogun and Japanese sound artist Moskitoo. The 7″ designed for the Portugal/Spain tour of Sontag Shogun comes in an edition of 500 copies and Digital and is released on November 15.

For the uninitiated (myself included) Sontag Shogun is a Brooklyn based “collaborative trio that makes use of analog sound treatments and nostalgic piano compositions in harmony to depict abstract places in our memory. Textures built from organic materials such as sand, slate, boiling water, brush and dried leaves, both produced live in performance and recorded to weathered 1/4″ tape, warm up the space between lush piano themes. All of which is abstracted coolly in the reflective digital space of treated vocals and a live processed feed from the piano.” Moskitoo is a Japanese sound artist and vocalist. So far she has released two albums on Taylor Deupree’s 12k label as well as collaborating with FilFla as well as contributing a number of remixes.

Home Normal describe this release as Post Classical / Electronic Ambient and that is truly what this release is, a combination of both those genres. With the exception of Ian Temple’s piano playing and Moskitoo’s vocals it is hard to attribute who is creating the remaining sounds. Jeremy Young uses oscillators, tapes and piezo mics, Jesse Perlstein on laptop, field recordings and Moskitoo on organic instruments. But together the four artists create something quite special and fluid.

“The Things We Let Fall Apart” – The track starts out with an oscillating drone that is joined by minimal piano before manipulated electronics and field recordings join in to give the piece a real feel of the fusion of the genres. Leading up to the introduction of Moskitoo’s vocals, the level of ambient drones and crunchy electronics increases, with the vocals being initially manipulated like the electronic component. Moskitoo has a breathy vocal style that has a distant feel and nostalgia to it which allows it to appear of floating above the music. The vocal section itself is not long (it is roughly the final minute of the piece that the singing really takes place) and could probably have music either side of it, but it works perfectly with the mix. Piano, electronics and field recordings add extra innocence to the track (especially if you are not fluent in Japanese). Listening to the track you realise that all the elements contained in the song are all included for a reason, there is nothing superfluous in the piece. 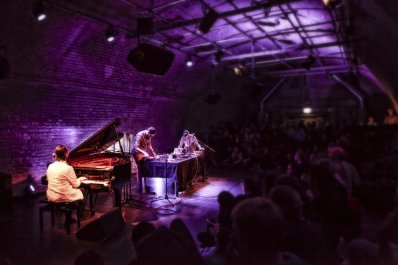 “The Thunderswan” starts with Temple’s solo piano with its rich melancholic tone that is accompanied by fragile electronic glitches and pieces of manipulated piano. Moskitoo’s vocals float in as the electronic filigree increases in its presence. The tones from each part – the piano, electronics and vocals are all separate in their mood, texture and color. The electronics start filling up the sound with a grainy, glitchy swarm like feel. The piano increases in intensity as does the manipulated sounds which are presumably processed via laptop. The ambient component comes from Moskitoo’s vocals which eschew words for a section to created stunning vocal drones, before returning to conventional singing with the vocal drones accompanying the singing. The electronics start to become noisier in nature and come from a different perspective to that of the piano which has become grander in nature and has started to be played in a rolling style. Musically this track is quite lush, epic and uplifting.

On this single Sontag Shogun and Moskitoo have ably demonstrated how to collaborate. The way they have been able to fuse their music together and construct it results in an enjoyable listen. Hopefully this is not the only collaboration that the four of them come up with. Totally Recommended.