From The Mouth Of The Sun – Hymn Binding. 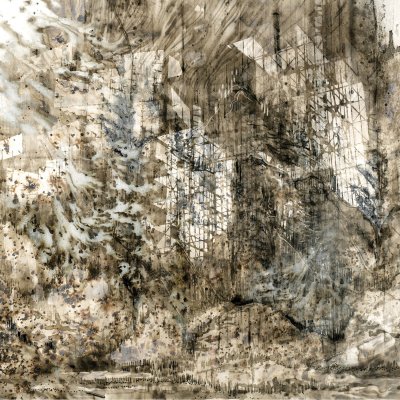 “Hymn Binding” is the third FTMOTS album following “Woven Tide” (Experimedia, 2012), “Into the Well” (Fluid Audio, 2015) and soundtrack album”Menashe” (Wayfind, 2017) under their own name. The names Aaron Martin and Dag Rosenqvist should be familiar to readers of this blog due to their releases on labels such as Preservation, Under the Spire, Dronarivm, Miasmah, Eilean and others. This album was mastered by the trusty ears of 12k boss Taylor Deupree and finds it well at home on the Lost Tribe Sound label.

The label state “At the core, From the Mouth of the Sun’s sound is comprised of cello,
piano, acoustic guitars, lap steel, banjo, ukulele and pump organ. Yet with Hymn Binding they’ve allowed those acoustic sources to change
shape, at times turning them into something that more resembles synths or digitally rendered sounds. They do this, not as a means of disguising them, or really wanting them to sound like synths, but to bring out new layers from already existing timbres. Rosenqvist mentions, “There’s something very beautiful and rewarding to working with acoustic sound sources. Because when you record them, you never know what you’re going get, and you can never repeat it exactly the same way. The wood in the instrument changes from air pressure and with different temperatures. You change your sitting position from one take to another and all of a sudden it sounds slightly different. You move the microphone or you move something in the room and it sounds slightly different. Acoustic sound sources allow for chaos to be a part of the creative process, allowing for something you can never fully control.”

My first thought when having a cursory run through listed is how great the sound is. You can get albums that have issues with mixing or mastering, where the sound is compromised because of the multiple elements and where depth, light and shade are muddied up. This is definitely not the case in regards to this album. It is a treat for the ears, the vibrancy of the instruments, the patience, the depth, it’s all there.

“A Healer Hidden” kicks off the album with what sounds like an affected banjo giving a circulation droning sound which is joined slowly by long multiplied violin lines which cut through the sound as static builds up to breaking point before dissipating and slowly droning out. This brief piece is almost an intro, but will give an indication of terrain that will be covered throughout the album.

“A Breath to Retrieve Your Body” Backwards recordings that are like watching something glitch in reverse and sound a bit like a distant and faded memory, open this track with Basinski-like ambience that are supporting by slow placed drones that sound like they are created using some sort of brass instrument which take over the sound as the backwards recordings fade away. The brass drones are joined by more urgent emotive violin that has a sense of intent to it. The two main elements – the brass and the violins are juxtaposed to each other in both their musical intensity and the emotional intensity. The more orchestral morose brass drones for me are the highlight. Towards the end the static returns for a tiny section as the violin disappears and the brass drones slowly retreat to the shadows with a quiet, relaxed feel.

“The First to Forgive” uses silence to effect as the track slowly starts off very quietly with string drones before a shimmering, echoing sound like a ripple on a pond radiating out. Martin coaxes violin lines from his instrument that convey both melancholy and hope. Gentle guitar pieces with a post rock feel, field recordings adorned by static, possibly some buried piano and rolling instrumentation flesh out the track which could be described as an Ambient/Post Rock/ Drone marriage of sound. The layers and elements are given space and time and are used for a reason and not always as a layered part. Elements like shimmering key-like instrument section for example become the first focal point before leading into the guitar being more central.

“Light Blooms in Hollow Space” distant and old sounding repeating minimal piano gently plays to your left while on your right hand side your ears are met with an accordion drone (or pump organ) so captivating that you havens noticed that the piano has changed tempo and is joins by spindly guitar playing which is also joined by possibly cello and other string instruments creating a rather cramped sonic section that is more freeform in it’s playing and the clashing sound than the previous tracks. Elements disappear almost disappear as quickly as they arrived add we are left once more with the repetitive piano and this time cello as opposed to accordion.

“The Last to Forgive” opens with delicate piano lines with deeply mournful violin and a section of distorting field recordings holding the mid section of the sound palate under which cello that appears to be following the piano lines, gives the track the deeper tones. The sound of the piece gets quieter and quieter which is similar in the beginning of “The First to Forgive”. Slowly it retreats into silence fading away with field recordings of a droning nature and the piano only remaining. 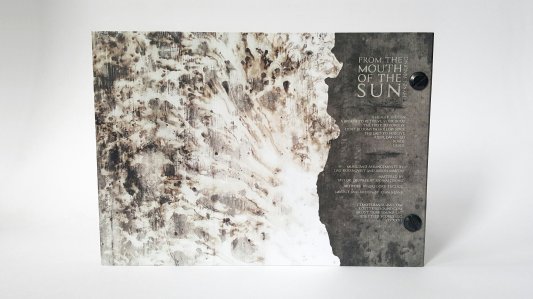 “Risen, Darkened” is where the duo get epic. Silence welcomes long haunting drones that are buried deeply as if in a tunnel and this closer you get the more pronounced they sound. The drones inhabit different levels of sound giving high, middle and lower layering, but are also moving at the same time which makes them multidimensional. Guitar, Piano, Cello, static recordings, percussion and other elements build up together and become symphonic and chugging in a way that is like a drone/orchestral version of Japanese post rockers Mono. They bring the music to the cusp of overflowing and carefully restrain it in. The last-minute and a half sees the intensity stripped back with minimal piano, classical like guitar, minor drones, scattered field recordings gently bring the track to rest. A clear highlight track of the album.

“Roads” slowly flowing and unwinding stark piano lines are joined by layered and duplicated violin and cello lines, while a separate cello section cuts through and another violin has a saw like approach as it cascades across the music and has an Americana feel to it (think fellow LTS musician William Ryan Fritch). This is joined by a complimentary twanging guitar sound which leads the track in an old western / southern gothic vibe with screeching and static field recordings which add to the ominous quality of the music and move it into epic territory once more. And like the preceding trick they pull back the reins just before falling of the cliff.

“Grace” the Pump Organ/Accordion slowly drones emitting a sound reminiscent of the dawn of a new day. It oscillates and electronic noise of an indistinguishable nature scatter around cutting across the sound in a cut up but buzzsaw fashion. A melodic sound appears deep in the mix which reveals itself once the piano comes out from under the cloak of sound. The sound starts changing with more string drones replacing dominance of the electronics and they compliment the piano which was more at odds than aligned to the electronics. The timbre of the piano changes to one of more chime like than the one that wrestled with the electronics. Slowly the track fades away, ambience, electronics, drones gently retreat to the silence. “Grace” is fitting finale to the album.

From The Mouth Of The Sun have delivered a stunning album and have carried on Lost Tribe Sound’s outstanding the Prelude to the Decline series. They show how to make deeply textured music seem effortless and reward the listener with an album to enjoy endlessly. Totally recommended. 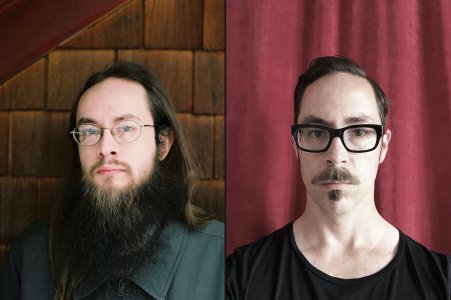