The latest batch of releases from Oakland, California-based Constellation Tatsu label came out on May 15th. Constellation Tatsu has been putting out releases since 2012 and have seen luminaries such as Celer, Hakobune, Chihei Hatekayama, Alexandre Navarro, Panabrite and others pass through its predominantly cassette released catalogue. The current Spring Batch 2018 features the following:

“Open Submission” is UK Composer Alex Crispin’s second album following on from “Idle Worship” on the Sounds of the Dawn label. Musically defined as New Age/Ambient/Electronic/Experimental to name a few and utilising a variety of keyboard based instrumentation (Pipe Organ, Casio, Rhodes Piano and others) and electric guitar.

The title track opens the album with manipulated slightly off kilter Rhodes loops creating a background sound to the guitar experimentation that runs atop it. The loops create a slight woozy/pulsing sound, while the guitar comes across as free form with an occasional ringing tone and sound that reminds me of Mark Knophler on the “Local Hero” soundtrack’s title track. The two elements seem diametrically opposed with the loops being constant and the guitar bring more expressive and wandering.

“Okho” sees the electronics be the central focus with a reverberating drone kicking the track off, while two elements join in – a screeching electronic sound and a bassy pulsing drone, before glassy new age synth progressions rolled over the top. The Synth also has drones that stretch out adding another layer to the track. You get a feeling that Crispin likes to have consistent elements over which he can express and explore.

“Pharaoh” feels like a Modern Classical track with its progressions, just not it’s sound which is a muted synth sound that naturally with the mutedness, gives it a foggy distance. A long form drone slowly comes into field which compliments the synth and elevates the track with its rich soaring sound. After a brief fade of the drone the music is swamped by a succession of synth and string drones that if you were to draw them as lines would be angled and cutting through each other (like the top of a teepee). The tone of the track changes while still having that soaring quality. The track ends nicely returning to the opening motif.

“Rosewater” a fused sound of guitars and some sort of keys that chime ring out before a sharp piano section and a bed of drones float about. The guitar and the piano add a percussive feel to the track , while the various layers of drones fill up the sound to bursting. Keys that ring out and shimmer seem to be Crispin’s trademark and increases the ambient effect on the tracks. For this particular one the drones almost overwhelm, but not fully saturate the piece. A mention should be made of the end which is a nice wrapping up of the track.

“Clearer” cut up looped sections of synth that have a robotic sound quality to them are joined by shimmering guitar which has a light and airy, almost windy tone. Drones that come associated with the guitar almost overwhelm with their occasional sharp tone. Another guitar section is added this time a having a darker tone and looped like rhythm, that mimics the original set of loops nicely.

“St Stephens” ends the album with a church organ dominated piece that allows the track to have a constant central drone to which the elements can flow over. There is a rather solemn feel to the track which can’t be escaped due to the nature of the instrument. But, it is by no means miserable, more like introspective. The ambient qualities are all there with long haunting drone sections that sustain the mood and compliment the church organ nicely.

If music that approaches New Age is your thing, or you like music that hearkens back to a classical ambient period, then “Open Submissions” will be for you.

“Chihei Hatakeyama is a Tokyo-based ambient musician and mastering engineer who creates chiming, shimmering soundscapes with acoustic instruments (including guitar, vibraphone, and piano) and laptop processing. His works often evoke scenes from nature, and appropriately include an abundant amount of field recordings and other organic sounds.”

His name should not be new to anyone with his releases coming out on labels such as Room40, Hibernate, Kranky, Home Normal l, Hidden Vibes as well as his own White Paddy Mountain imprint. His release for this batch is called “Scene”.

“Quiet Forest” a mist soaked sound scape emerges with airy drones and some form of guitar manipulations that are low in the mix, but give a slightly haunting melodic texture. Like the title suggests, the music evokes a lack of outside distractions or forces and the moves at a languid pace. You get the feeling of wind moving through the trees and swirling around.

“Whiteland” a darker, stormier piece that sounds buried and uses feedback like sounds to create the drones. Glassy sounds filter in which enhance the murky sounds. The music comes across as quite free-flowing, unrestricted by structure.

“Blue Reminder” a piece that has a layer of soft static covering it that feels like its recorded in a rain storm (or it could be actual field recordings of a storm). The music feels moody and emotional with layers of drones that sort of pulse while other form tendrils. The music has a glacial quality, containing melody, but never really heading into the light. “Blue Reminder II” follows in a similar vein, but musically a feeling of reflection is noted by the listener.

Music can be interpreted differently over time and under different conditions, it could be that I was ill when listening to this particular release that has formed my opinion of it. Unfortunately it didn’t really grab me. It works the subtle moodiness well, but I was looking for a bit more variation in the piece and changes in tone over the four tracks. Like I mentioned before, in a different setting – say feeling introspective or for something calming to listen to – I may enjoy this release more. 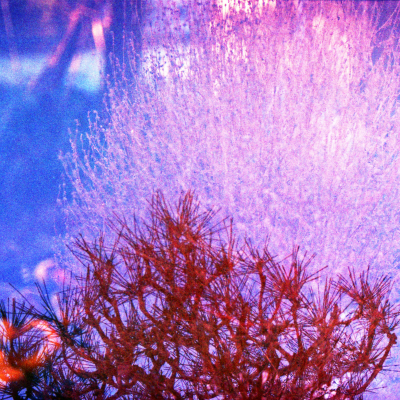 Endurance is no stranger to the blog with three of his previous cassette releases reviewed here. For the uninitiated, Endurance is Japan based Canadian Joshua Stefane is a bioethics researcher and translater. He also is involved with the Muzan Editions label.

“Enbram” tape loops with effects, distant church organ like sounds, crackling sounds, field recordings make up a piece of electroacoustic ambience with experimental touches. The sound is infused with all these broken electronics that give it an uneasy edge which the drones in their floating configurations compliment.

“Sonatum Prima” rain storm recordings with bird life and tones that sound like bells vibrate out form the opening of this track. As it progresses the tones are joined by another series, this time closer in the mix. As the track progresses a drone replaces a set of tones and the presence of field recordings increase with the darker influence of the storm taking hold.

“Menicus Opulens” vibrating synth tones that lean in the proggy/new age vein bend out and fill the sound under which a rumbling drone lies. As the track moves on the intensity in the sounds increase, with additional sounds of fluttering electronics entering the fray and keeping the proggy vibe going. There is a bit of an unsettling feel to the music – it’s almost alien like in feel.

“Mercurian Umbra” stakes out the darker drone territory but with some dark piano bassy tones giving a suspenseful feel with slight buzzes of proggy synth and other drones joining in. Scattershot electronics briefly flicker before the sound is joined by a rumbling sound that feels like it could engulf the track. The dark bassy tones are what centers the track – the building block if you will, for all the other sounds to attach to. You get a feel of the darker side of music which is becoming a feature of Stefane’s work.

“Itineranturum” rumbling noisy loops sounding somewhat industrial rolling with the glacial speed of a lava flow. There are howling drones that wrap around the central rumble with what sounds like fragments of dialogue embedded. Towards the end the drones dissipate and noises lose their aggression to become noisy drones

“Fluminam Ductur” manipulated tape loops of motivational dialogue that sound like ghostly voices of the past are joined by similarly disjointed melodic tones that sound initially like a lost transmission before coming more present. Warped synth enters the sound fitting in the middle of the tones and loops. As the track progresses the tape loops change to be more of looped noises than dialogue and a rush of swirling electronics joins in. As the track enters the last two minutes snatches of voices are heard once more almost returning the track to its beginnings. While other tracks on the album feel filmic, this one is firmly in the experimental field.

Endurance’s music firmly lies in the Experimental/Drone sphere with his music coming off as soundtracks to imaginary films that are in the Sci-fi/ post apocalyptic genre. With a regularly growing discography – three releases this year thus far, you can easily check out his music if these sounds interest you.

“Ascension Now” like “Open Submissions” is the follow-up release from an artist who has released their debut on Sounds of the Dawn label. According to Constellation Tatsu “As a follow-up to Lunaria’s 2016 release “All Is Dream” on Sounds of the Dawn, “Ascension Now” is composed of two, 20 minute tracks inspired by the need to transcend our limits by attaining higher levels of consciousness. Daniel Guillén takes us on a journey into inner space that feels reminiscent of the golden era of new age and cosmic music.

“Ascension Now” takes the listener on a far-reaching sonic trip with elements of field recordings such as church bells (which givers a nice, but not overtly religious feel to the music), crickets, wildlife and adds long form drones with multiple layers that slowly unwind in different directions that cover classic ambient sounds, but also the proggy synths of the 1970’s. The music is in no hurry and there are ebbs and flows to points were there is less going on. The thing to note is that the music doesn’t get bogged down. Changes in tones come in with small subtle melodic elements creeping in just before the ten minute mark. You get a feeling of weightlessness in the music, like you are floating as while there ate as mentioned before, ebbs and flows, the music doesn’t have peaks and troughs. In a way this is a soundtrack to lying on your back on grass and staring into the night sky.

“A Higher Energy Realm” starts off slowly with a consistent dark-wish drone before a series of synth stabs and ambience enter and permeate the sound with thick weighty synth. There is a warping sound that winds its way around the almost wall of synths. In a way it’s almost like blood pumping around a living creature. There is a sci-fi to the track, that is otherworldly where alien landscapes are explored. A nice ominous buzzing breaks up the synth sections and adds a bridge to a section of synths that sound retro-futurist and that radiate out and shatter, before gaping back into a more noisier post apocalyptic sounding section.

It’s not often that I listen to music that can be classified as new age or that is almost twenty minutes in length – largely due to some artists running out of ideas and my own attention span, but both tracks on this release have enough going on to sustain interest in the listener.