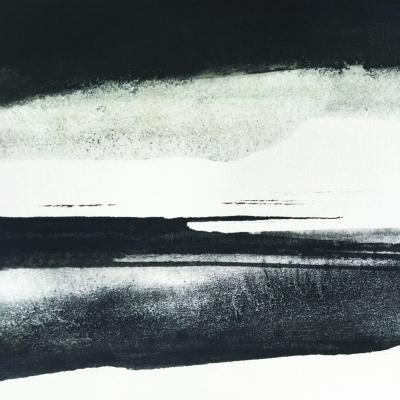 Home Normal have been releasing a series of collaborations in the last year or so. Mostly they have been releases from label boss Ian Hawgood alongside his friends (and notable artists in their own right) Wil Bolton, Danny Norbury and Giulio Aldinucci. However, this time it is a collaboration between James Murray and Stijn Hüwels. The interesting thing about this collaboration is the name Silent Vigils, as this signifies to me that it appears to not be a one-off collaboration and rather, hopefully an ongoing project. Both artists in their own right have been making their own mark in the underground Ambient community and you can hear the distillation of their musical experiences and experiments coalesced into this release.

“Silent Vigils is the work of Stijn Hüwels and James Murray. James Murray will be well-known to many fans of the label and the ambient scene alike for his highly celebrated works (including 2017’s ‘Killing Ghosts’ for Home Normal), as well the Slowcraft label which he curates. Stijn Hüwels is the curator of the Slaapwel label, and his work with James as Silent Vigils marks the first in a series of collaborations he will be releasing over the next year on Home Normal.

Their work as Silent Vigils is so delicate, slow-burning and powerful in spirit, that the very name they use for this project is just so fitting. The word ‘vigil’ naturally leads to a concept of reflection and one of being quietly awake and on ‘watch’ during the night. The music reflects this idea so perfectly, with its quietude, patience, and a feeling of nocturnal devotion.”

“Molenbrook” opens quietly and slowly with a lightly haunting sound scape that unfurls at a glacial pace. The way the album opens reveals the path of time that it will take. No rush, no need to over complicate, just letting the music flow. The multi layered drones have qualities like whispiness, mournfulness, a rusty metallic coating and wind soaked ambience with an innate ability to effortlessly to glide upon one another, twisting and turning to reveal their qualities. There is a balance of tones so as the music doesn’t stray into one particular territory for too long. You get the visual cues from the music of staring up into an ever-changing sky with a variety of different clouds and weather.

“Mossigwell” initially feels more environmental with a slight unsettling rumble that evolves before settling somewhat in the background, or to the least, at the side. There is a dusty quality to the droning vibrations. Meanwhile a long arching drone with a chime quality starts to waft across the sound scape. Several layers of drones seems to coalesce around this one and set about adding a melodic touch that is by no means sweet, but in a way gives a little bit of light to the piece. The music feels while not being Dark Ambient, certainly cloaked in mist. Around the four-minute mark the tones start gaining sound and the way that are reaching out. Another drone starts winding its way around the background with a certain weight to it, that while it is not dominant, fills up the sound and makes the track grander. The sounds start to move in circular fashion with a certain reverberation featured in them as once the pass, their sounds reach out on dissipating close to their return. The track slowly fades to peace.

“Molenbrook, Mossigwell, Zwartewall, Fieldem… places neither here nor there; half in the world, half in the mind. We began this project as an exchange of gestures across the water, a dialogue motivated by mutual respect and revolving around our shared love of the minimal, the graceful and the understated. We completed it on 22nd March 2017 – the day of the Westminster attack, one year to the day after the Brussels bombings. These four pieces have become our personal dedications to the quiet strength of blended culture, free thinking and open borders.”

“Zwartewall” field recordings which sound manipulated and sound like rain or crickets is paired with a mournful tone and a rumbling tone. Electronic flickers abound as the rumbling sound increases with a gristly presence layered on top alongside guitar tones that fragment and bend. Metallic clanging percussive devices combines with the other elements give a sort of claustrophobic and other worldly feel that has not been felt previously on the album. If the titles are of made up locations, then this is an eerie one. The guitars ring out, but the tones are submerged and murky, the ever-present field recordings / electronics have a pulsing feel and the general hum that rolls in and out feels like humidity.

“Fieldom” is the epic of the album clocking at more than thirteen minutes in length. While the previous tracks have taken their time to ease on, “Fieldom” starts with intent with billowing drones that share a textural quality while exhibiting their own individual sounds to come together to become greater than their individual parts. There are rich tones, sine wave tones, stormy wind tones and they have a feeling of weight. For me this is pure ambient in its finest. The music is never staid, nor boring, not stationary, but freely flowing. Motifs reappear in loop like fashion and over time there are subtle additions to the drones that keep them interesting. A gush of rushing air starts to enter the track with less than five minutes remaining which ushers in a change of sound as a fuller drone scape that is soaring is paired with a cut up pulsing background sound, low-level electronics and spectral drones, starts to dominate the track.

Silent Vigils have released an album that in this fast pace world is suited to taking it slow and being present. The music is Ambient without being light and fluffy with a darkness and depth to it that is not overpowering. The two artists involved have proven over the course of over forty minutes, to be perfect collaborators and hopefully will continue working together. An impressive debut.