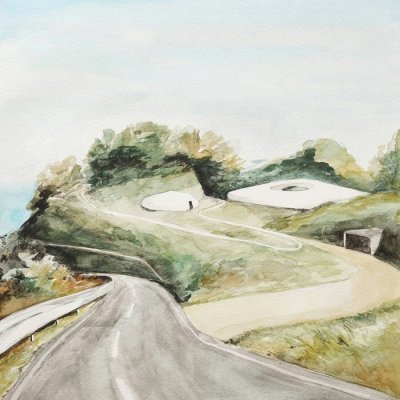 The second vinyl release on El Cerrito, California-based label Mirae Arts comes by Michiru Aoyama called “Brilliant Days”. Aoyama, based in the quiet seaside city of Kamakura, just south of Tokyo is an Ambient Producer whose work features manipulated sounds of guitar, glitches and tones. His background includes being hand-chosen by Ryuichi Sakamoto in 2006 for a Japanese radio audition and he later flew out to Berlin in 2008 to further his studies in electronic music production. His work has appeared on labels such as Organic Industries, taâlem, and Somehow Recordings.

“Michiru Aoyama’s Brilliant Days LP comprises of two long tracks featuring untitled songs that weave in and out of each other. Michiru’s signature guitar harmonics are treated with serene electronic filters and met with youthful under-layers of electronic experimentations and glitchy backdrops.“

Divided into two long “Untitled” tracks aka”Side A” and “Side B”, the album contains several tracks that utilize repetition and minimal sound sources, and works on developing these.

“Side A” opens with fractured glitches, pulses of sounds, rippling guitar abstractions and squelchy electronics. In the randomness there a fluid rhythm that is created which shares a quality of something floating on waves and the varying swell resulting in the heights and movements of the floating object. The music has a colorful, light filled sound with tones that are radiant, flickering and melodic. As the sound is ever-changing, the piece is not static and draws the listener in, with the guitar work being particularly entrancing.

The second ‘track’ or part of “Side A” goes sonically for a very stylistically different sound. Residing closely to the darker end of the Ambient territory, the music features of kilter glitches that form a haphazard, disorientating rhythm, while the music has long ambient drones that sound morose – as if they are vocalizations of ghosts. Just when you might think of where the artist is heading, this flips you on your head. Composition wise it shares similar qualities, but that’s where it ends.

The final five or so minutes see the artist return to lighter tones, but not the same style as the opener. This last track of the side has more sonic detritus rather than glitches, with a feeling of some sort of nature field recordings paired with hazy and heavy organ like sounds (quite possibly his guitars through electronic filters) that feel they are wilting in the heat. The music contains drones, but not in the traditional sense, more as a result of being cast of by the instruments. While the glitches of the earlier pieces gave the tracks their rhythmical approaches, the guitars on this one vaguely give its feel to this track.

“Untitled” aka “Side B” starts with multi layered guitar glitches, scattershot electronics that sound like interruptions to a transmission and more traditional sounding ambient guitar sounds. The guitar sound occupy various layers with a bass tone in there, expressive lyrical playing as well as an experimental feel. Because of the obscured nature of the piece you have to sift through the glitches and electronics to fully appreciate the guitar work that is somewhat obscured. As is stated in the press release above, there is a strong woven aesthetic to the pieces on the album, which is probably best demonstrated by this track.

The next track, while sharing similar qualities to others on this album, stands out as a dust soaked piece that is musically submerged with the guitar work sounding rather muddy. This is not a criticism as it adds to the ‘buried’ or ‘unearthed’ feel of the piece. You could imagine how vibrant and light filled the flip side of this track would sound like, but it has its own set of qualities. The music sounds weather worn and like it’s rippling in the breeze, such is the way the glitches cascade across its surface and it has an almost dream like quality, but more in that in between step of being conscious and slipping into deep sleep.

As the half way mark of the side progresses the music changes tack completely with melody and light returning. This track combines long drone that radiate out in a linear fashion, slowly coming in vertical waves, while a glitch framework of fast electronic interference jostles over. The two main elements are diametrically opposed as one is rather stable and maintains a regular sound, while the other is more freeform and ever-changing, which makes for a nice juxtaposition of sound.

The final part of the side and indeed the album, pairs two sounds which in a way are different, but in another way, very similar. Both sounds – one that is a rippling melodic one and another that is harsher and rougher, share cut up sounds that while not glitches, have a similar DNA. There is a third element that acts as a bed for these two layer on top of and that is a fairly linear drone, that rarely changes shape and lies right in the middle between melodic drones and darker drones. This while being subtle, actually is the core of the piece as otherwise it would mainly be about experimental sounds.

I have to admit not being aware of Michiru Aoyama’s work before despite being familiar of the labels he has released on in the past. His work on this LP focuses on weaving sounds, playing with tones and experimenting with both glitches and electronic treatments of guitar to create dense music that cannot be defined an a single listen. The listener is required to engage and spend time investigating the sounds contained herein. With enough variation throughout the pieces, that shouldnt be something hard to do. The music is all about depth, tone and a flair for experimental touches resulting in a kaleidoscope of sound. For fans of more experimental slices of Ambient music.

If you are in the US you can order via Bandcamp, but for customers outside of the US there are a variety of stores here you can get the album from.