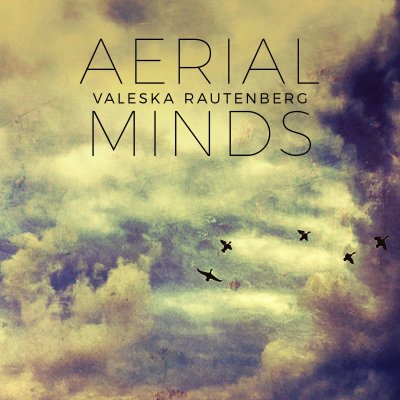 I have an aversion to vocalists that can easily cause me to switch off from listening to a particular piece of music the simple reason being exposed to some horrible singers and also the preference to more instrumentally laden music. Now, when it comes to someone like Valeska Rautenberg I am at odds with myself. It’s not that she is a bad singer,quite the opposite, Rautenberg has a fantastic voice. It’s just when people truly sing sometimes the style of their vocals can change the perception of the music. Rautenberg has the type of voice that could be easily heard on a mainstream radio station and it is this style of singing that initially makes me think “Does this release fit in the (I guess narrow) scope of this little blog?” I then go back and look beyond the voice to hear the music beneath it and the answer is a resounding yes. The music covers genres such as Modern Classical, Electronica, Trip Hop and more. This is the first in a series of four ep’s each dedicated to the four elements – in this case Air, as Rautenberg states the Ep is about “capturing the intangible, ethereal and unthinkable in their own very unique ways. It gets political, deals with loss, falls in love with human weaknesses and much more.”

“Born in East Berlin to celebrated actor Klaus-Peter Thiele and painter Rosemarie Rautenberg, she grew up living and breathing creativity and has followed that path throughout her life. Valeska started working as an actress at the age of eleven when she scored her first big role in a crime movie. She continued starring in movies and tv shows on and off for 10 years while at school and later during university.

However as a teenager she discovered her true love, music, which has remained her passion ever since. She studied music (voice, piano, songwriting and production) with various teachers and “Musikwissenschaften“ at Humboldt University Berlin and Freie Universität Berlin; she also received a private scholarship from a renowned opera singer teaching at UDK Berlin. Furthermore she has toured with bands, become a dedicated music teacher, and released music of different genres on various labels.”

“I Am Weak And So Are You” Rautenberg opens the Ep with the Modern Classical influence showing starting off with just piano and voice. Her vocals have a breathy torch song singer style while the piano is minimal and flowing. The texture of the piece changes once the title line is sung with heavyish beats, layered vocals (of different singing styles) and basslines. Once the chorus has passed, the music some what returns to style of the opening, but with the added influence of the extra elements coming through. As the track progress Rautenberg’s vocal styles consistently change to suit the emphasis on the music – from shy and frightened, to chanteuse style and through to determined and intense. The track shoes the depths of her vocal talents.

“Midnight Children” opening with vocal loops that set up for an electronic influenced track with rumbling bass lines, minimal shuffling percussion (going with the trip hop mention before, the work of Lamb comes to mind). Rautenberg on this track comes across as a combination of smoky Jazz vocalist meets Torch singer. The music and vocals seem to come from diametrically different position, bit it is this clash that makes them work together as it offers more dimensions than just complementing elements.

“All is Forgiven” delicate piano sets the tone as fragile sounding vocals with flowing etherial backing vocals swirling around. There is a subtlety to the music which is the successful component of the track as its very much a case of less is more. Strings and electronics compliment Rautenberg’s voice, which she herself uses as an instrument.

“Judas” is probably the track that led me to the quandary I faced in reviewing the release. It is probably the most commercial sounding of the ep’s four tracks and wouldn’t be out-of-place on an artist such as Adele’s albums. There are tiny fragments of whimsical instrumentation in the track, possibly toy piano, plus the way she utilizes layered sections of vocals that gently pulls it back from being overly commercial sounding.

As mentioned in the opening paragraph, I am not that much of a fan of vocals. There is a good chance I would listen to this sparingly for this reason, however I suspect when I do, it will be an enjoyable listen for the simple facts of Rautenberg having a great voice and the well constructed nature of the tracks.