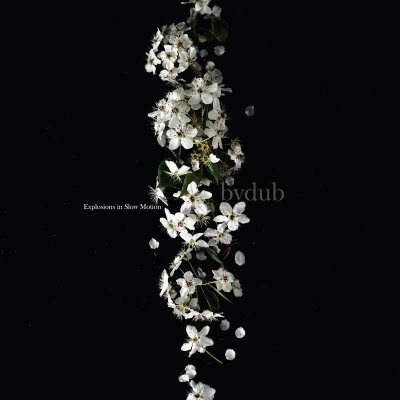 n5MD open the year strongly with a new release from Brock Van Wey, following on with releases from Ex-Confusion (March 22) and Proem (April 19). Over the past year a lot has happened in Brock’s life. If you haven’t already, go and check out the great interview that Headphone Commute did with him here, I’ll be waiting for you. Now that you are up to speed, let’s get down to his latest album “Explosions in Slow Motion”. The album, his first for n5MD since 2017′ “Heartless” sees Van Wey continue in his quest of making music of high emotional quality and on an epic scale that few can match.

“Explosions in Slow Motion is the new album from Brock Van Wey’s transcendent bvdub project. Van Wey’s previous n5MD album Heartless found him harnessing the turmoil around him to create something vast, emotive, and brooding, yet somehow comforting, allowing you to cradle in its weight. Months after Heartless’ release Van Wey moved from turbulent times of his native California home to the chilling winter of Warsaw Poland. A divergence. Alone against the icy cold, confined to the indoors in search of protection against the world outside, Van Wey channeled, as he always does, his surroundings as they coalesced with his self-imposed aberration. The outcome of this move and period of near-total isolation is Explosions in Slow Motion. Featuring four long-form songs accompanied by four “ember” vignettes, Explosions in Slow Motion is quite possibly Van Wey’s most mournfully isolated work in his massive discography to date. Filled with swelling arcs of specters from the past appearing then slowly drift away. Foggy memories of friends / loved ones and even adversaries seem to achingly sweep across Explosions in Slow Motion’s eighty-minute runtime. There is a forlorn thread of shrouded nostalgia throughout the album which by album’s end leads to catharsis, acceptance and the finality of progression.“

The album opens with the first of the album’s four sixteen minute plus epics in “Us Again in Amber”. It shows Van Wey balancing nicely the swirling stormy ambience with melancholic piano lines and dubby feels, with the space and texture that you associate with his music. The music is thick with emotion as it slowly unfolds revealing the various textural elements that combine to create the type of music that you can easily  get lost in. An easy method would be to rely on loop like passages, but Van Wey works on evolving the piece throughout, changing the feel from more ambient based sections to more orchestral ones including one that has a feel similar to the dronescapes of the Lost Tribe Sound label. Towards the end are remnants, almost a reprise that could be sampled by another artist.

The first of the four part “Ember” vignettes features a bustling sound, almost backwards in sound. Where is traditional style is to let the music evoke and breathe, this vignette is rather tight, rapid and in a way like a musical collision. Different sounds and styles snake their way around and over each other creating this tapestry of sound which feels at times chaotic and other introspective.

The album’s title track raises the stakes with the depth of its soundscape. Predominantly featuring epic prog synth washes that build up hypnotically, getting more and more pronounced as the track progresses. There is also a fair amount of varied ambience which alternates between supporting and drenching the music. As the title suggests, the explosions are these waves of ambience that are constructed out of complementary synths or more environmental squally ambience. The music is not all bombast as around the ten minute mark it becomes lusher with piano and long linear drones soaked in melody. A brief return to the noisier drones brings with it snatches of strings that sound warped, cut and processed.

“Ember 2” has a slightly similar sound to part 1, but eschews the tightness of the first piece for a more melodic and lengthier drone work. The strings can’t help but add melancholia to the piece, but they also hold a sweeping grand feel as well, as if putting something into context.

“Disappearing in the Sun” sees Van Wey dial-up the ambience to ten. With a slight warped and hazy feel, this is music for coming down to. Synth washes over each other with slow-moving passages that enhance the feel of the track. The music has a floating quality, one which you can sink deeply into. Scattershot electronics and snatches of faint voices permeate as the music slowly gets denser and denser, bringing it in closer to the texture of the previous tracks. Synth lines remind me of soundtrack work of John Carpenter with their retro and repetitive feel that builds on the motif. Buried deep within are the tiniest of beats which are used as a supporting element rather than one that propels the track. Towards the end the track returns to the ambience that set it on its course as it gently unwinds.

“Embers 3” continues the evolution of these short pieces. While initially having a feverish of sorts opening, it moves with thanks to its long drones, to more melancholic/introspective soundscapes. Of all the tracks so far this one feels as close to the isolation mentioned in the above quote from the press release.

The final epic “Enemies In Your Eyes” is build around fragile and at times distant sound sources. The piece is dripping in melancholy with deeply emotive passages that are cinematic in the way that build, rise and subside. If you are to take the title literally and take into consideration the things mentioned in the Headphone Commute interview(s), then you can see Van Wey internalizing his isolation and despair before revealing it to listeners. While not totally without hope, you get the feeling as the track moves through several movements of changes within the artists emotional or possible mental state as he works through how this isolation is affecting him and how he will come out the other side. As the track comes to the end hope comes through in the radiant ambient drones that act like sunshine cutting through a light rain storm.

“Ember 4” is a footing way to bring the album to a close. Long melodic linear lines that stay rather centre, meaning that the never peak nor drop, bring about a feeling of all that has gone before has been resolved and that whatever comes next, is the result of a fresh start. Whatever had happened had been taken on board, resolved and now can be moved on from.

“Explosions In Slow Motion” is not for those looking for music that does not mirror emotional turmoil. It’s not overly unhappy, but it does look into deeper, personal situations and replicates the experiences in a musical form that conveys to the listener wholly the artists intentions.

“Explosions In Slow Motion” is out now, while the CD press sold out with Vinyl and Digital remaining. Recommended.