Philadelphia’s Hotel Neon are a bit of an anomaly in the current underground ambient scene. When you think of Ambient musicians you tend to think of solo projects, rather than a group per se. They are also a working live band, with both and domestic and European tours in the near future, which is again something you don’t usually associate with this form of music. Since 2013 the trio of Andrew Tasselmyer, Michael Tasselmyer and Steven Kemner have unleashed five albums on labels such as Home Normal, Archives, Fluid Audio and also self released works. They also have been active as solo artists and in groups /duo’s such as Gray Acres and The Sound of Rescue.  The Archives label home to their “Means of Knowing” album have teamed up with the trio once more to release “Vanishing Forms” on Cd with the band releasing it on vinyl.

“The Time Between” opens the album with a sense of venturing into dark territories, with possibilities open anything. The music is the style of the purest form of long form drone which allows the tones to be fully developed and examined. While not dark ambient in nature it is dark in feel, but with a sense of discovering what lies beneath. There is a tension to the piece that comes across in its tightly wound sounds and its the fluctuating weight that these sounds have that changes the texture and feel of the piece. Sometimes with drone piece they can feel as if they are floating and weightless, but this one feels very earthy and rooted.

“Sunfire” follows with a similar vein, but the exception being the building noisy, metallic sounds that have a feeling of things falling apart. Field recordings (or home-made) of storm sounds cast a feeling that ventures from one of impending bad weather and the cold and darkness of it, too a clearing of situation that sometime arises post storm. This is best reflected by the tone of the guitar that radiates out post storm. The guitar radiates this light and hope that cuts through the darkened cold drones light a ray of light that emerges from behind a black cloud.

“Old Growth” through photos of the duo and trio shots on their website guitars feature quite predominantly. But this so far is the first track to really put the instrument under the spotlight. Musically it feels like a mixture of experimentalism (predominantly the at times free form improv like guitar work) mixed with drone works and field recordings. The noticeable thing about Hotel Neon’s works are the levels of sound, some of which barely heard, and buried deep. They are multi dimensional when it comes to their layers and construction. It’s this attention to creating an evolving and living sound that is expertly brought to clarity by Rafael Anton Irisarri’s mastering.

“Dark Becomes Dawn” after a brief rusty metallic opening, Hotel Neon set about creating the sonic equivalent of dawn with slowly sweeping and reverberant drones. The thing when I think about something like dawn is the way that even when it’s still dark and you can’t see the sun over the horizon, the distant light becomes noticeable and as it slowly gets brighter and brighter. While not exactly following the full-scale of darkness to light, the trio make the equivalent of representing a snapshot and all the tension that comes with the opening salvo of a new day. They do this by layering different types and styles of drones, each which occupy their own space and also conjure their own moods.

“Vanishing Forms” The title track ushers the listener into dark, cold soundscapes. Drones from the distance cut across while a squall of sound envelopes the listener. There is a feeling that you are by a body of water in the middle of nowhere just before dawn. The fog envelopes the water, not another person is in sight, the wind is cold and chilling. All that surrounds you is the rather oppressive weather and environment. Hotel Neon manage to transport you to such a place that occasionally feels bleak and unforgiving through the glacial pace of their drones.  As the track progresses it manages to show the faintest glimpse of light breaking through and lightly warming up the landscape/soundscape.

“Drawn Back” is a track that feels like a looping ghostly vortex of sound. With loops you always get that deja vu feeling which enhances the quality of the loop and also re-emphasises the sounds. With this track, while it returns to familiar sounds, it is an ever-growing and mutating slice of drone that feels like it is constantly re-inventing itself. The tones are balanced from the colder temperatures to the richer warm tones, texturally they range from sounding washed out through to rich and full-bodied co-existing in the same place and time. This fluidity and layered approach is one of the reasons works like this album cannot be fully understood on a single listen.

“Burning Mist” initially I was thinking we were in familiar territory with this piece, but on closer inspection the tones that sounded possibly cold are tightly wound oscillating sounds going left and right which are joined by more experimental and electroacoustic sounds and techniques. While other pieces have been rooted in the drone sphere, this one feels more like a melting pot of sound art piece containing collaging sounds which flicker in and out surrounded by drones which hold the fort in a structural sense. Guitar experimentalism is the main source of these micro sounds, which in some cases are buried deep within the track to be uncovered, rewarding listeners who pay attention.

“Falling Away” the trio bring the light on the album’s closer, well their version of light. I use the term light in a fair bit of my reviews as I am fascinated by such textural concepts in music such as light and dark and how they are used. For my particular taste the balances of these two elements is crucial to my appreciation of the music, as much as in life, everything needs to be in balance otherwise the equilibrium is off and things don’t have that emotional impact that they could have. With “Falling Away” the Hotel Neon blueprint is intact and the track manages to encompass hope, introspection, light, some darkness, slow smooth pace and is a soothing way to bring this collection to a close.

With Hotel Neon’s music you get a dense, layered and rich soundscape and one that is not something that can be easily classified on a single pass. Headphone listening is recommended to absorb all the detail contained within the pieces. With some music you are generally lured into a direction that the artist is trying to show through their works. I find with the pieces contained in this album, that the listener themselves are able to make up their own narrative as there is an openness to the music. That said it does help to like the darker and colder tones within these pieces.

“Vanishing Forms” is available in two editions. You can buy the CD (with the bonus (not reviewed) track “Chasms”) here: 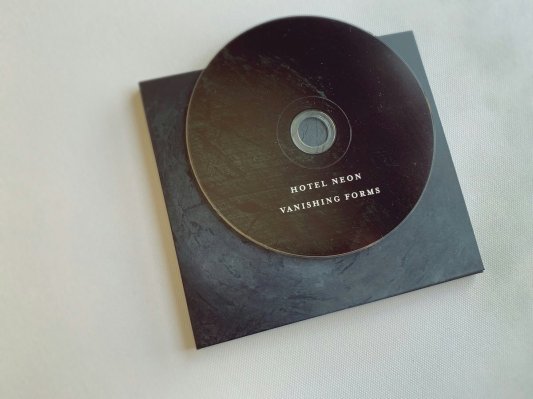 You can buy the vinyl here:

The band will also have stock via Norman Records of the LP to try to get around the crazy prices that the USPS charge.