Schole Records have a knack for releasing works by composers that blur the lines of genre classifications. This is very evident with the latest release from Paris born composer Quentin Sirjacq. Sirjacq who has studied at Mills College (California) and the Royal Conservatory (The Hague), returns to Schole for “Companion”. An eclectic musician, he has worked in many styles alongside such names as Fred Fritch, Meredith Monk and Dakota Suite as well as composing for film, radio and theatre.

“Companion” is the 4th solo album from Quentin Sirjacq in collaboration with Japanese label Schole. It follows « Far islands and Near Places » released in 2016, where appeared guests instruments like marimbas, vibraphone, glockenspiel and synthesizers along with the piano.

In this new set of songs the melodic touch and the delicate harmonies from the piano still radiate in parts but the way orchestrations and musical structures are transforming themselves during the songs is a bright new element in Sirjacq’s music.
Every track is a sort of journey starting in one place and finishing in another, slowly moving and unfolding through a mix of influences layering one another.
Gamelan, African polyrhythm, neo-classical, free jazz, electronic music or film music all collide.”

This is an album that will quickly dispel any ideas you have for pigeonholing it. The pieces are so diverse traipsing through Modern Classical styles, Jazz, Post Rock, Ambient, African rhythms, electronica and glitch to name a few. If you were to isolate one track them you would be missing out on so much. The quality that stands out for me is that sometimes having such a diverse sonic template can mean going from track to track can result in a clunky listen. This is not the case with this album as it flows very nicely.

The opener “Variations” lures you in with its Modern Classical piano and coldish synth lines. It sets you up thinking that you are in for another Modern Classical album, but then Steve Argüelles on Congo and minimal drum machines lead you down a different path. Where you are taken is an exotic is slightly moody environment. Almost pensive and at times bordering on joy, the music is exotic and intriguing. The way that Sirjacq and his fellow musicians steer you away from preconceived ideas and instead direct you into territories you were not expecting, results in a joyous listen.

“Carol” nicely builds on “Variations” with its ambient tones and minimalist piano lines and adds in instruments such as vibraphone, marimba and percussion to create a piece that feels unencumbered by a certain musical style. There is a consistency throughout the piece as well as a mixture of melodic and stark tones, but as it has a relatively free sounding construction it opens up to personal interpretation, rather than directing the listener in a particular direction. It also merges nicely from subdued beginnings to fuller soundscapes.

“Dance” is the track that sees this glitchy electronica meets mallet instruments and has a nice balance between electronic and acoustic influences. There is/was an Australian band/artist called The Townhouses and they mixed in similar sound sources, which makes this track so appealing to me. There are some styles that I don’t tire off and this is one of them. Julien Loutelier’s military style drumming also adds a nice touch in giving the piece a bit of muscle underneath the melody.

“Will You Be There” is the type of track I was suspecting that I would have heard more of throughout the album. A piano driven piece that nicely mixes up two different sounds of the instrument – a stark one and a glassy tone fragilic one. The repetition and slow pace of the piece helps reinforce this feeling that borders on melancholy, with more of a foot in introspection. This is a ambient feel to the piece that is found in the spaces between the notes.

“Organum” with its synth driven, darker electronic sound takes the music into another direction, while still being relevant to the other pieces. Constructed by Sirjacq and the electronic treatments of Arnaud Lassos’ collection of malleted instruments, it has this flow to it which feels fluid. The music moves from darker sci fi synth sounds to percussive electronics and finally the percussive elements themselves. With many layers being revealed its the subtle synth lines that underpin the piece and form the transitions between sections.

“Companion” the title track centers around Sirjacq’s piano work paired in parts with whistling and possibly glockenspiel. Like I have mentioned previously there is quite a difference in the sound of each track. This one moves from Orchestral sounds that mix nicely to the whistling through to solo piano plating which has a mixture of Avant-Garde and jazz influence. The musical styles change throughout with ambient passages and mixed with humming Rhodes like instrumentation. The final result is s piece that is very much free form. There are times, like the opening that have this cinematic quality and then there are times where it feels musically quite loose and free.

“Harmonium” a piece that nicely forms around the instrument of the same name shares the space with soaring Synths and a plethora of harp like sounds and fractured electronics. After a slow build up mixed with some frantic sounds, the piece enters a completely different territory and tone with the piano dominated second half. A reprise of what unfolded in the first half filters through, but the track feels like a tale of two sides. The opening has a mixture of lighter synths mixed with darker and the ending rotates this.

“Choral” changes rather dramatically from it’s opening and slight distant affected synth before evolving into a free jazz meets orchestral drone piece. Argüelles traverses the drum kit in rapid fashion while long, rich symphonic synth orchestrations venture into totally different areas and despite the obvious differences they kind of work out well in complimenting each other by focusing on the differences.

With an album such as this you will find that you can respond better to different pieces. For my particular taste the pieces that work best for me are the early tracks like “Variations”, “Carol”, “Dance” and “Organum”. The fusion of electronics and natural instruments works so well in these pieces. For those that like the more open and dare I say experimental side of things will like the three other pieces.

“Companion” is available on CD and Digital. 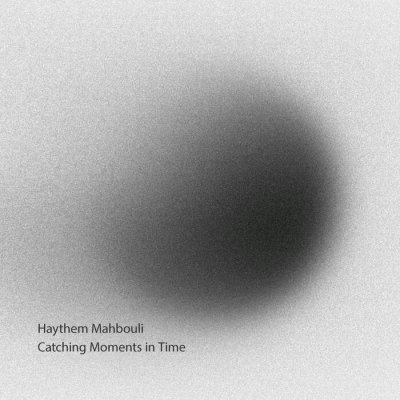 This particular album has an interesting backstory. Tunisian musician Haythem Mahbouli grew up playing in Rock and Metal bands but harbored a desire to make music in the ambient and modern classical styles. With this new direction he started composing for TV ads, short films, andenrolled in a sound editing program. After the  2011 Tunisian revolution, Haythem decided to move to Canada and settle in Montreal. He put his composing on hiatus and took a Sound Designer job in the video game industry. Five years later, Haythem decided it was time for the hiatus to be over and for him to record his first solo album. Because of this decision we are rewarded with such a spectacular debut.

“He seamlessly blends orchestral parts recorded by the City of Prague Philharmonic Orchestra with sound textures and design elements with a desire to create minimalistic theatrical compositions.

“I don’t want to predefine my genre or have an instrument-centered composition (e.g. piano). I see music as a mix of sounds that create emotions. Emotions can emerge in any music form. I picture music as images; each of them is associated with an emotion. This album (Catching Moments in Time), is a journey throughout experiences I lived and tried to translate. My goal is for the listener to adapt it to their own, mix it with their emotions and create their own images.”

Listening to “Catching Moments In Time” you have to constantly pick your jaw off the floor, it is that good. There are times were you can’t work out were Mahbouli ends and The City Of Prague Philharmonic Orchestra begins. It is the type of album you listen to in a sitting and as such feels like it is one giant work. The music is as symphonic as it is graceful and has a flow that just feels effortlessly good. There is a great balance between piano, electronics and strings with each nicely complimenting each other. A track like “Moments That Remain” demonstrates just how well the elements work together in possibly the most relaxed a beautiful piece of music on the album.

A piece like “Passage” contains similar vocal samples as the opener, but introduces a more experimental and collagic soundscape which is an interesting direction after such a strong opener. The track alludes to an undercurrent which continue throughout the album.

For a perfect example of the album’s feel look no further than “And Miles To Go Before I Sleep” as the characteristics of the album are on show. Ambience, melodic electronics, sweeping string drones, field recordings and piano coalesce to create a piece of understated beauty where the pace is not rushed and the depth of sound is most obvious. I would love to know how the construction of the piece (and indeed the others) came to be as the blending of soundings feels natural and if the music was written together in the same room, rather than what I suspect is a long distance collaboration.

The middle part of the album with the thematically linked titles of “Transition”, “Birth”, “Growth” and “Loss” exhibit the styles of the album from the strong heavy and highly emotional “Transition” to the nicely subdued and ambient “Birth” which mutates into a reprise of the opening track and then shares the qualities of “Transition”. “Growth” on the other hand is a slow burning monster which rumbles along with waves of strings that cut through and repeatedly threaten to open up the piece before tantalizingly pulling up short. Finally in the last two minutes the tension is released and we reach the triumphant crescendo. The final of the middle quartet “Loss” sees the welcome return of Mahbouli’s piano with the strings taking a somewhat background position and the track balancing into a nice Modern Classical piece with Ambient touches. From this it slowly builds into an epic piece high on suspense and with an intensity that becomes somewhat of a hallmark of the album.

All that remains to be said is that this is a truly exceptional work, especially for a debut. Those years working in film, TV and games have given Mahbouli the perfect apprenticeship and this album is a result of years of refinement. Put simply this is a work that deserves to heard urgently. Totally recomended.

“Catching Moments In Time” is available on CD and digital.