The Dauw label return once more after the successful Stijn Hüwels release with an album that vanished in the blink of an eye,  r beny’s “Echo’s Verse”. The initial pressing of 300 clear vinyl are long gone, but a 300 repress on black is due to start shipping in June. r beny aka Bay Area, California based artist Austin Cairns is one of those artists that come across once in a while and seem to transcend a genre descriptor and reach a greater audience than most. For an ambient artist to have greater than 15, 000 You Tube subscribers, over 10, 000 followers on Instagram and over a thousand each on Facebook and Twitter is quite staggering.

“Four years ago, the California based musician r beny came on the radar with numerous videos on You Tube and. Instagram in which he explored the world of tape and sound synthesis. You could easily see his music growing and pretty soon he came to the fore as a master in modular synthesis. This culminated in several solo releases and live shows. Herein, r beny, clearly showed his capacities to combine detailed and fragile melodies with subtle textures in order to create sonic narratives with a highly emotional character.

“Echo’s Verse” forms no exception on that regard and continues along the same melancholic lines of his previous work. However, whereas the initial albums were much more centered around feelings of loneliness, isolation and solitude, the new album clearly moves away from a sole focus on sad and distressing emotions. “echo’s verse” touches the other side of the spectrum as it is about emotional connections, bonds and not feeling alone in the universe.“

The album’s concept revolves around a quote from the American author Mark Z. Danielewski which is “Myth makes Echo the subject of longing and desire. Physics makes Echo the subject of distance and design. Where emotion and reason are concerned both claims are accurate. And where there is no Echo there is no description of space or love. There is only silence.” What Cairns takes from this is that the essence of an echo is communication between human beings and with this record he is exploring the presence of presence.

According to Cairns “If you play a simple piece of music through a delay, the original sound echoes around itself and creates a beautiful new sound. Without the echo, the sound is just by itself. A lonely sound.”. With this album Cairns seeks to explore the “how the complimentarity between an echo and its its initial sound creates new elements of hope and joy.“ 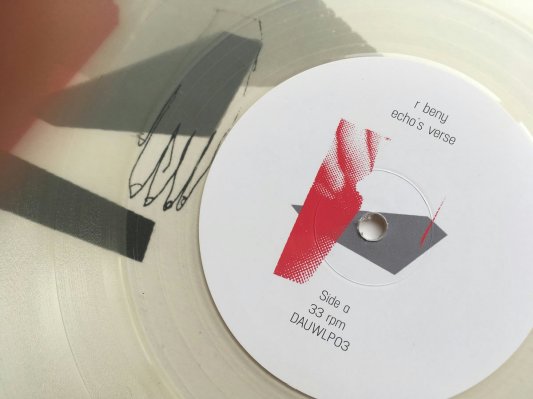 The albums six tracks are the relaxed and inviting style of ambient and electronic experimentation that both calms the listener and draws in their attention – especially if you are investigating to see if and what Cairns was intending to create has come to fruition.

What becomes initially apparent is the blurriness to the music. That naturally in this style is not a criticism and is more of a tool being used by modern day “ambient” artists. For Cairns you can fairly instantly hear what he means about the beauty of the echo as it bounces around the opener “Crushing”. The track has a wistful dreaminess mixed with foggy memories and a touch of melancholy through it’s what sounds like string drones. (but isn’t possible with the instrumentation consisting of synthesizer, mellotron and tape loops). Perhaps the mastering by Ian Hawgood who has a fondness for old analog gear including real to real tape players contributes to the sounds captured herein? The layers of sounds that ripple over each other creating this floating blanket of sound work nicely together creating a real balance in tone without extending to the outer limits.

With “Felt” we are drawn into a distant detritus soaked environment which mainly consist of hiss, crackles and bell like sounds that woozily move, much like a cassette tape that has been chewed up at some point, straightened out as best it could and played repeatedly. Echoing in this piece creates a semi call and response that feels at some point to be moving away from it’s original sound and existing in its own plain. The track has many layers, each having a different tone which when you listen closely they all act as supporting sounds, each with their own feel, but contributing to a greater thing.

“Loma” is the type of track you could easily here in a ambient guitar piece or a modern classical style. Keeping with the misty mood of the album thus far the track feels very moody. Bathed in static and blurred so all the edges are smoothed, the repetitive piece has all the internal angst you would expect someone going through. Whether this was Cairns intention I am not sure , but this is just how it feels to me. The echo’s in this case are not so obvious and are more like a supporting element. The way the track breaks down into gritty loops at the end in a way sort of confirms my feeling of the mood.

“If I” a slow burn of a piece with oscillationg loops slowly being revealed under the static and as they come to the surface you start to detect the changes they are undergoing. They eventually spill into a pure drone piece before revealing the initials loops once more underneath. The music has a freeing fling ambient feel, despite the cloak upon it. It’s like the shackles have been let go and you are lying on your back staring up as the clouds of various types pass over head with nothing getting in the way between you and them. After the moodier earlier parts of the album, this is a nice return to a more hopeful terrain.

“Echo’s Verse” The title track brings up the purest expression of the echoing quality of the theme of the album and shares a bit of the Caretakers oeuvre. Continuing with the freer more melodic sounds of the previous track, Cairns locks in the woozy and hazy touches that balances “If I” with the other pieces on the album. The way the drones evolve is a mixture of light melody and more moodier tones with snatches of other synth sounds desperately trying to break through creating an introspective feeling piece that doesn’t dwell on the negative.

“And Fall, Standing Alone Again” the album finishes with the piece with the most fractured sounds within it. You get the feeling that the sounds are bouncing off objects and being mutated as they return fire and put through programming to mutate them. There are movements within the piece that are full of orchestral flourishes which makes for a captivating listen as the balance of glitchy tones and long form drones works effectively well and shows Cairns’ approach at experimentation and also as a composer of grand sounding works. The quote above were Cairns talks about echo’s creating new elements of hope and joy is demonstrated on this track in abundance.

With a six track album based on a theme you could easily get bogged down into one particular style or sound and repetition becomes noticeable. With “Echo’s Verse” Cairns explores the premises and inspiration of the author’s quote and then seeks to expand on it. A track like the closer would be a great direction to see Cairns explore more as the construction, balance and depth of sound and tone result in a pleasurable listen.

“Echo’s Verse” is available on LP and Digital via the Dauw label.