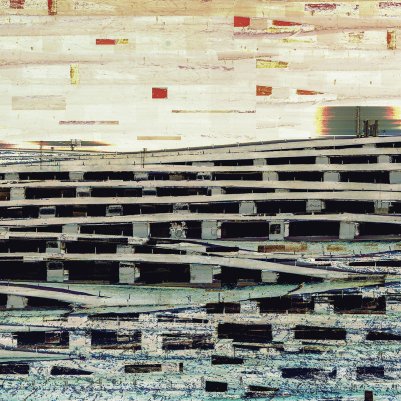 The Ambient power trio of Uwe Zahn (Arovane – Germany), Porya Hatami (Iran) and Darren Mcclure (Japan) see the follow up to 2016’s “Veerian” on Eilean Rec with “Ypsilon” nicely finding a home on the n5MD label, who also re-released Zahn and Hatami’s “Kaziwa” (as Porya Hatami and Arovane) back in May of 2018. Each member of the trio are well versed artists in their own right releasing music on such venerable labels such as Tench, Flaming Pines, Karl, DIN,…txt, ASIP and others. Each artist has collaborated in duo form (Arovane + Mcclure, Hatami + Arovane and Hatami + Mcclure) so it makes perfect sense for them to combine their considerable talents in trio form. The interesting thing will be to see how their respective musical pasts and styles can come together. Zahn has the Electronica background with more recent forays into Ambience, Hatami, the nexus of Sound Art and Ambient and McClure the balance of both.

“Their 2016 release, “Veerian,” [eilean rec.] focused on free-flowing soundscapes, whereas this new album incorporates more overtly melodic sequences and rhythmic elements to widen its horizon. As on “Veerian,” Zahn, Hatami, and McClure paid meticulous attention to sound design for “Ypsilon.” The inclusion of subdued beats adds a swing to the textural layers, and arpeggiated sequences imply rhythm and momentum. Other tracks remain blissfully ambient, taking time to unfold and breathe without any rhythmic framework. This balance between gentle propulsion and beatless soundscapes, melodic and ambient, lends the album a unique character and takes it into fresh new areas of experimentation for the trio.“

“theyll” opening with clanging almost industrial soundscapes and fractured sound the piece is slowly washed by lush, but wet sound drones – as if sea spray has been cast over. Micro electronics bubble underneath as a bass drum pounding beat becomes a call to arms, while a horn like sound adds a moody texture to the proceedings. The electronics mutate into IDM styled clips of sounds that have a rhythmical core as more sounds start to reveal themselves. The electronics actually sound like they are dialogue that has been cut up and re-worked with dub-like treatments. The track likes to juxtapose various intensities in rhythm as a feverish, field recording like sound pounds away distantly.

“cyntr” starts with two sound sources that are quite different but have similar styles before, what could be described as bouncing ball synth lines, become the central focus. A parallel metronomic rhythm pairs alongside as well as disparate ambient sources from calming to more abrasive ones. The elements while retaining their own space, somewhat jostle primarily because of their different features, although close to the end melody wins out.

“synfolt” is like music that is trapped and confined and over time it starts to change its form. Beginning with found dialogue, the track also includes layers of quite different ambience – from cold long drones, through to pulses of sound and one that is reserved in nature. Synths bounce off each other whole the music moves through different temperatures from roaring cold ones through to dense and claustrophobic ones. Just where this track sits in a musical classification is beyond me.

“blynn” is another unclassifiable track. The opening consists of flickering sounds, rhythms which disappear into the ether and swells of Ambience. From this part it changes and for my money has more Zahn and McClure ‘s influences (though I am happy to be corrected), although initially that is not the case with its scrapes of sound and rich beds of granular ambience. Rapid percussive synth lines beat a rhythm over while fragile tones gently bounce off of. Two-thirds of the way through the track it starts to break down to consist largely of flickering tones and pulses of air and returns to the same, but slower flickering beginning.

“absyrb” the more dance floor orientated sounds that have been bubbling away as part of the mix find their place on the all to brief “absyrb”. Mixing up an dub techno feel with shuffling rhythms and a rippling electronics, the track teases with an almost dance floor feel mixed in with the trio’s experimental sound treatments and structures. Industrial clangs, oscillating sounds and music that is forever changing it’s shape and feel make up a track that leaves you hanging for just a little more, hoping that maybe even it could become a bit of a belter.

“prysma”  moves from pads of oscillating synths and spaced out ambience that scatters and spits morphs as it twists and turns through a darkened and cold tunnel of sound where synth pulses carry the same cold feeling as the drones. There is an otherworldly feel to the piece that also feels like it’s disintegrating in front of you.

“ypsilon” the title track compacts the soundscape into a collection of delightfully subtle glitch like granularity and melodic tones as well as similar, but excuse the bad description, bouncy electronic tones as “cyntr”. There is a delicate flow to the piece which offers a cerebral take on ambient where elements are used in a way that is low- key, but shifts the direction of the track. It’s the kind of track that I find myself gravitating towards these days. because it is minimal, it mixes up melody and has a drift without being stuck in the same place or going over previous territory.

“byte” is as close as you will get to a pure ambient piece on the album. Like the title track the trio offer an understated piece that is no means lacking in textures, as witnessed by the echoing electronics of it’s centre part. Opening with a shimmering collection of fractured, weather beaten and manipulated sounds, it nicely evolves into something more than a mere ambient track. One of the important parts of the track which is highlighted by it’s placement as the final track on the album, is the way that it sends the album off in an exultant fashion. There is a mix of underlying moodiness that supports the emotionally uplifting nature of the piece, that sort of has this feeling of looking forward, but not ignoring the past. The balance of the various sounds would lead me to think that this would be the best example of their combined styles.

The “y” centric album and Autechre-ish titles (I am looking at you Mr McClure!)leave the listener examining each track and trying to decipher the order of influence or each artists contribution. It’s not easy as it’s clearly not a nuts and bolts job where parts are added onto each other. Each artist brings in their style and together they form this mix that has components coming together, interlacing and creating a sonic fabric which is not just Zahn, Hatami or McClure, but Zahn | Hatami| McClure.

“Ypsilon” is available on LP/CD and Digital from July 12.