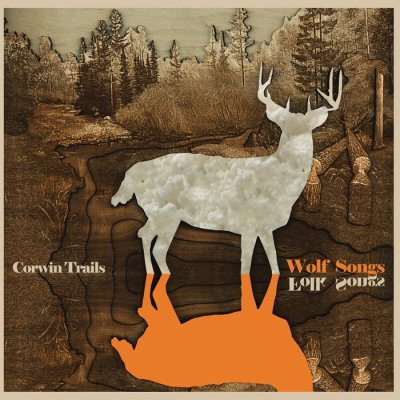 Doing a blog with a specific musical coverage means you naturally get sent a lot of thematically similar sounding music. It can lead to listening fatigue. Ever so now and then you get something that is a little left field that requires you to take time to absorb it. This is the case with the Corwin Trails album which was released on vinyl back in mid July. Typically I receive Ambient /Drone/ Modern Classical works, but this particular release sits in own special style.

“Corwin Trails is Michigan-based musician and sound artist, Samuel Corwin Vandiver. Inspired primarily by his love of nature and travel, Samuel has been writing and recording music for almost 15 years. His most recent effort, Wolf Songs Folk Songs, marks a clear turning point in method and approach, making use of his newfound hobby, field recording. In 2015, with a handheld recorder as his guide, Samuel embarked on a 4-month trip throughout India and Nepal. This experience would forever change his life, and the entire journey was documented by way of sound. Samuel amassed three volumes of material, variously catalogued under “Folk Songs”, “Religious Music” and “Environments” (released in 2016 on Green Field Recordings, “Selected Field Recordings from India and Nepal”). These recordings would form the backbone of what eventually became “Wolf Songs Folk Songs” Corwin Trails is all about the process, experimentation; his albums are often densely layered and take years to form; songs are fractured deconstructions, yet each interwoven with a common theme or narrative”

The music of the album manages to traverse musical landscapes within tracks and from piece to piece. There are times when you feel you are listening to a Gamelan record or a glitchy electronica one and then there will be a piece which has a real earthy feel (the type that would come out on Lost Tribe Sound, indeed William Ryan Fritch is the closest comparison I could make). The music is highly percussive in nature (using string instruments such as banjo, bazouki, nepeneroyka, sarangi, auto harp, and of course guitar) with a density that reveals a lot of undercurrents and layers that make up each piece with field recordings becoming both a rhythmical device as well as creating moods. A perfect example of the album would be “In Search Of” which highlights Vandiver ‘s complex arrangements and fluid genre pollination. It is every bit earthy as it is futuristic and electronic with sounds that remind me of early Autechre percussion seen through an Asian inspired prism.

Vandiver is not afraid to take the listener on a journey as proven by his back catalog of recordings that are about transporting the listener to a physical location. A perfect example of this is the track “Good People” where field recordings are front and central in a piece which has an uplifting centrepiece. One thing that comes across in the pieces is that they feel both joyous and expressive, but also exploratory. It seems like Vandiver is a traveller of the world, as well as being acute about sound and the natural world,  and that these pieces are less about music and more about telling stories. The press release above alludes to the time that Vandiver takes to create his pieces. The three years between his field recordings albums and this release are evident in the highly inventive painstaking sound design which exists on many levels. There is no laziness in the piece and no filler – in essence Vandiver utilises a variety of sound sources to create his lush vibrant pieces with an emphasis to space and clarity.

“Wolf Songs Folk Songs” was expertly mastered by Ian Hawgood, is available on Lp and Digital and is recommended.