With the year and decade coming to an end, I rush with a flurry of blog posts. Shorter than  most I normally do, there will hopefully be 22! done before the year is over , nicely tying up everything and clearing the decks before next years releases (which has already got close to double digits). Here are some fine releases from the KrysaliSound label.

“The lucky collaboration with the amazing Danish artist continues and KrysaliSound is proud to end the reissue series with his very first release.Some artists need time and a lot of work before finding a musical path, the perfect conjunction between soul and maturity is often hard to reach. I think ojeRum was born with this special feature and this was highly perceptible listening to his debut album. All of the music we know by him is just a natural consequence of this seed of art. “There is a Flaw in my Iris” will be available in vinyl format and in a new digital mastering.”

Early in the year KrysaliSound started issuing LP’s with the Tropic of Coldness release “Maps of Reason” being their debut vinyl release. Their second venture continues their relationship with Paw Grabowski aka øjeRum and the reissue of “There Is A Flaw In My Iris”. This is the third such issue of Grabowski’s first album which first came out  digitally on Rain Music in 2007, then on cassette via A Giant Fern in 2014 (and also via the artist in 2018) and finally now on vinyl. As this is the first release from the øjeRum project it is quite different from his more recent works. Of the releases I have heard his music is more of the submerged tonal quality, while this particular one is very acoustic based with vocal treatments, making it close to “Nattesne” in instrumentation if not sound.

One of the things that stands out is how open and spacious it sounds. The øjeRum I have become accustomed with involves a shrinking world where you feel the walls closing in on you. Grabowski uses his voice in equal measure with the acoustic guitar and encircles this with a variety of electronics and field recordings. There is a real pastoral feel that acoustic guitar naturally lends the music and Grabowki manages to infuse it with additional soundscapes that neither detract from it, nor be overly obvious and cliched. The piece “When” is the closest resemblance to his more recent works with it’s static soaked tones. With a discography that is large it’s quite hard to compare this particular release others, if you haven’t heard everything (there has been over a dozen releases this year alone) , then you have limited comparisons. That said the overall ambience, room for sound to develop and clarity of intention make this an enjoyable and relaxing listen.

“There is a Flaw In My Iris” is available on limited vinyl and digital. 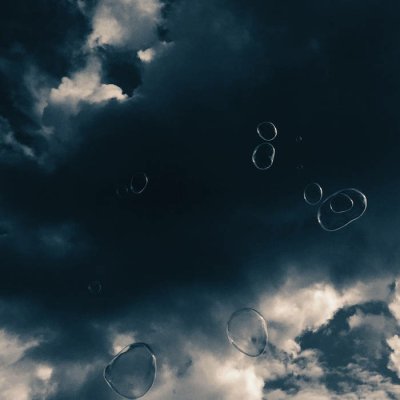 Some artists definitely have their modes when it comes to making their pieces and indeed defining their sound. Slowcraft Records honcho James Murray in my opinion works best when he goes in long form mode. Much like his “Landscapes of Lovers” album, Murray devotes this release to two pieces clocking just over and just iunder twenty minutes in duration. Despite the album title and art this is not a purely environmentally styled album, although field recordings are woven in through out the pieces. The opening track or Side A. “In Your Head” has a series of drones and ambience that fuse together to take the listener on a winding journey. The main tone that carries the piece has a church organ like feel, while the piece as a whole encompasses influences of sound art, ambience and electroacoustic forms that combine to give a piece that is as haunting as it is mysterious. The layers to it require deeper listening as they won’t stand out on first pass (like the sub bass lines and minimal percussion), but they will reward the listener who likes to seek out and investigate music that little bit more.

“In Your Heart” takes a more subtler and quietly cinematic approach, while still using similar techniques such as the lower level sounds that manage to attract your attention (like the ‘heart beat” that runs through the core). There is more of a tension felt in the piece that the previous one in the way that Murray builds up the electrical like drones and holds them close to breaking point. By the mid way point there is a change in dynamics with an intensity uncovered, backwards glitching and morphing sounds while the piece moves away from it’s cinematic opening and veers into a direction that suggests uncertainty. Towards the end of the track it moves to a similar territory or pace of the opening, but the mood in some ways is fore sombre and final.

I would hazard a guess that Murray is continuing the tradition of releases like the aforementioned “Landscapes of Lovers” and “Falling Backwards” to tap into personal experiences and channeling the music in an emotional direction which I feel is evident in both the track titles and sounds on this release. “Embrace Storms” is a co-release between KrysaliSound and Slowcraft with Vinyl, Cd and Digital editions available.

“KrysaliSound is pleased to introduce a new debut album taken from the wide Italian ambient scene. Paolo Iannantuoni (aka Nāda Mushin) composed a magnificent and emotional work recorded with guitar, electronics and filed recordings. The album is a soulful peregrination that constellate the emotional chrysalises of a two years existential journey, flanked by an experimental sound research aimed at the composition of sonic landscapes, which attempt to enclose and recall these states; the result of free and spontaneous improvisations from demanding pathos, then finely embroidered in ever changing sonic buds.

Nāda Mushin is the project of Paolo Iannantuoni based in Merlino, Milan. Nāda yoga (नादयोग) is an Indian metaphysical system based on the premise that the entire cosmos consists of vibrations. Sound and music are considered to be a medium to achieve a deeper unity with both the outer and inner cosmos. ‘Mushin’ (無心 “no mind”) is a mental state achieved by Zen and Daoist meditators in which there is just pure consciousness, free to be, flow and purely react to things.“

KrysaliSound label boss Francis M. Gri was fairly insistent about me checking out this album, which is a sure sign that the label are exited about an artist that they are wanting to get out to a greater audience. Nāda Mushin has some 22 releases on his bandcamp page from the last three years, some of which are singles and the others albums. Being the first time that Iannantuoni has come across my radar I can only comment on this particular release than compare it to his others. Using Guitars, Electronics and post processing Iannantuoni revels in music that is sonicly full, that dalliances in the dark ambient and almost noise spheres, which has become more of a style evident recently in soundtracks by the likes of Ben Frost and Mica Levi. The pieces are infused by thick, storm like squall that is a kaleidoscope of textures and colours. Some artists remain within a certain sound palette or tone , while Iannantuoni refuses this constriction making music that, while it has a similar essence and intent, it has just enough changes to engage the listener. The final track “Wabi-Sabi” is probably the most conventional and loop based but is also the type of piece that would have good to hear a little more of. Coming in at around seventy minutes and fourteen tracks it might be a challenge to some listeners, but in bite sized chunks that album shines a bit more.

“Mono No Aware” is available via KrysaliSound on Cd and Digital.