Blanket Swimming – The Sunroom / Music For Sleep – Sound Installation For Empty Rooms / From The Sea Of Changes.

The latest releases from the sister label ROHS! and Lontano Series contain long form compositions. These three releases have a total of 4 pieces and have a combined length of just under three hours. Two of these releases come from label boss Andrea Porcu under his Music For Sleep moniker, while the other comes from Nicholas Maloney aka Blanket Swimming.

“Nicholas Maloney is a sound artist, multi-instrumentalist, performer, and recording engineer from Jackson, Mississippi. He earned his bachelor’s degree in Recording Industry Production from the University of Southern Mississippi in 2017.  Working primarily in the areas of drone, ambient, musique concrète, and electroacoustic improvisation, Nicholas creates personal, evocative recordings, while at the same time offering a pallet of sound that can be used to practice the rewarding act of deep listening. He looks to challenge the listeners’ focus and perception of sound. Much of his work explores the textural nature of sound within a framework of progressing and evolving compositions. He is interested in the interaction among texture, sound, and space.​

I have to admit the name Blanket Swimming threw me. I had expectations of the style of music based on 80’s synth styles from people born well after the fact, you know the whole “looking through the prism of the past from things I have read about / heard”. Instead what you get with Blanket Swimming’s album is two long form pieces of subtle, glacial paced ambience that feels like a perfect sort of soundtrack for the uncertain times we live in. It can be difficult in describing pieces like these as they rely on such small movement of sound, sometimes spread out and using repetitive phrases as a major part of their pieces.

With the title track Maloney uses delicate drones which are almost like gentle waves with melodic tones and ever so slightly plays with the textures and intensities and he infuses the piece with a variety of field recordings. Maloney is no rush which allows him to build and work on his piece over the duration. This is also felt on “Look At The Cypress In The Courtyard” which has a more classical meets William Basinski feel and shows Maloney at his best as he creates build up after build up with slight dips in the intensity of each section. As the piece progresses you begin to notice the ultra subtle changes in the sounds and how the attention veers from sound to sound as well as barely noticeable degradation which tends to come into focus in the last third of the piece.

With these two piece Maloney while not re-inventing the wheel, clearly shows that he is adept at the more minimal forms of music which can be used to calm the listener as much as they can transport them away. The two pieces have their own essence while retaining a similar kernal of an idea. With what is happening now music like this becomes somewhat of a release. “The Sunroom” is available on limited  CD (60 copies) and Digital. 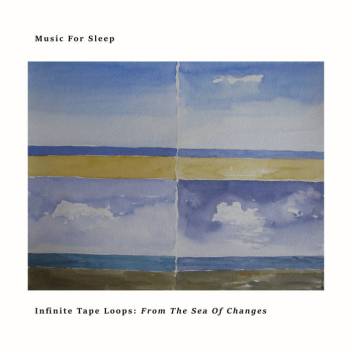 “Four decaying tape loops of different length running over and over simultaneously for hours in a empty room. This is an extract from a 3-hours recording session.”

From what I can ascertain the Music For Sleep moniker has been used by Porcu since 2018 with the majority of pieces clocking in at around forty minutes in length. This one track release is one of the two most recent by Porcu and the thirty two minute track is edited down from a three hour session. This particular piece makes me think of stillness and calm. The tones are gentle and somewhat opaque. There is a feeling of colour being leached out as if the piece is the sonic equivalent of an old photo or a nearly forgotten memory. The drones gently rumbling, pops occasionally appear like fireworks in the distance and while the pace is glacial and the colour is stripped, the music doesn’t feel cold to me.

“Hidden harmonies behind distant voices suspended in the air, like faded memories in a slow reverberation of emotions.The rain and the waves of the sea cradle my path on this  journey. Silences that are struck along the way keep in me the curiosity to find out if there will be another wave after the next one.”

The full title of “From The Sea Of Changes” contains the prefix “Infinite Loops” which gives you an idea of what to expect. It is in the latest in this series which has had five previous instalments – “Vol 1.”, “The Edge”, “People”, “Tampura And Organ Meditations (G)” and “A Song For Quiet Wednesday Nights”.  Similar in style to the above Blanket Swimming piece “Look At The Cypress In The Courtyard”, “From The Sea Of Changes” uses repetitive loops to build and work upon. The piece, much like the “Sound Installation…” one is colourless, but this one has a distant, rolling feeling. I get environmental cues when listening to it. This could be in part because of the nature of it’s rolling feeling – like on an overcast day and the continuous roll of clouds overhead or possibly it’s due to the gritty underlying sound which makes me feel of gentle waves lapping the shore. In some way without thinking of it what I have also just described is also the cover art.

Of the two release here I cannot choose one over the other. Both offer something different while working within the same field of work. Sometimes artists can get into a mode or a style which can make their music sound very much the same as their previous works. With these two release (and my first encounter with Music For Sleep) you have variety while still having an essence within the music.