Chris Child and Micah Frank are back with their second instalment of Tape Pieces. This particular release has found itself constantly on the front page of Ambient sales on Bandcamp pretty much since release. In fact it is in some six hundred collections, which is Platinum status in the underground Ambient scene. Chris Child is an Emmy award winning composer who also releases under the Kodomo (Japanese for Child) name, while Micah Frank is the man behind the Brooklyn based Puremagnetik label and is a Sound Designer with a history working with Abelton and Native Instruments. 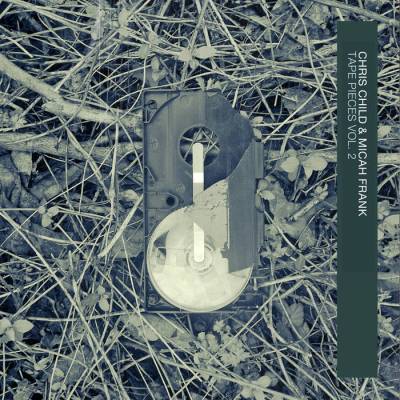 “While Tape Pieces Volume One focused on the layering and cascading of asynchronous tape loops, this second EP pushes the analog material further into drone territory, dissolving the sense of a repetition through the heavy use of filtering with effects so the loops blur together and bear a faint echo of resemblance to its source. The pieces are slower to evolve, exploring longer and amorphous forms, as in “Static Wheels”, which clocks in at just over 10 minutes.

As with the previous Tape Pieces EP, the songs emerged out of a week long session in Chris’s Portland Studio. Favoring two TASCAM 4-Tracks, Chris and Micah recorded layers of short tape loops using a few vintage synths and a Rhodes. The loops were further disseminated into drones though an array of guitar pedals. Field recordings from Portland’s coasts were subtly woven in, providing a tactile sense of place which inspired the moods of these pieces.”

I have deliberately not heard the initial release (and have just put it in my bandcamp wish list to remind myself about it) purely because I wanted to approach it with a fresh set of ears, rather than comparing the two releases. With positive reviews from the likes of Fluid Radio and Soundlab. The four pieces on this release are “Distances”,
“Static Wheels”, “Every Comet” and “Kettle Cove”. I was expecting to be somewhat taken into William Basinski territory which I guess is the consequence of identifying loops with that particular artist. And, while there are loops such as on “Every Comet” it’s not the same form or function of Basinski’s music. The pieces contained on this release seem to nicely fuse the more Ambient and Drone influences as much as they do electronica influenced sounds. A piece like the opener “Distances” has a glitchy, degrading dub techno feel which sounds as if weather worn media such as the image on the cover has produced some of the sounds that make up the piece, while a fractured tonal component adds hints of melody. The piece has a dreamy quality of being barely there, as if at any moment it will just disappear.

The epic ten minute “Static Wheels” is as epic as you would expect with a balance of airy drones and a menacing underbelly as well as fractured electronics. If you thought that “Distances” opened the collection strongly, then it is very much carried through to this track. This is where the duo are able to stretch out some more and play with atmosphere, tension and dynamics. There is a lot of subtlety going on with the soundscape being open to imperceptible shifts in tones and clarity as well as moving from quite and loud movements. This piece shows why it was referenced in the press notes above as it is quite an impressive work.

“Every Comet” takes into darker territory than before with the soundscape being claustrophobic and cold. Bass rumbles and repetitive beats adds to the menace as well as slightly harsher drone scapes and synth pads repeating alien melodies. While it might sound weird, my favourite part is the end of the piece where chimes like sounds emerge from underneath all the other elements and slightly lead the piece from the environment it was in. “Kettle Cove” rounds out the EP with a stripped back melodically glitchy tonal ambient piece that has an initial calmness which is a nice juxtaposition to the preceding track. As it moves forward the piece becomes denser with darker tones entering the track and changing it’s complexion from the kind of piece that was gentle to one that is more stormy. Raw guitar like feedback and harsh drones cascade across while dusty loops skips and pop. The EP feels like it is split into two distinct halves with the first two and the second two pieces pairing up with each other. The result is somewhat a flipside effect of differing moods and sounds. It is interesting in the way that the track list flows as sometimes ending on a track that is more about “light” and melody tends to finish it on a high. By finishing on “Kettle Cove” Child and Frank show the many sides to their music in the singular piece, so in a way it almost encompasses the aesthetic of the release. 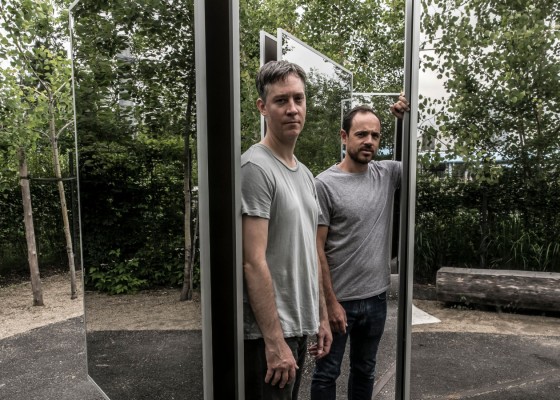 “Tape Pieces Vol 2.” sees Child and Frank in sync (much like the way they are dressed in the above photo) and at twenty seven minutes long it leaves the listener putting it back on repeat as it doesn’t wear out it’s welcome. Clearly the two artists have found a common language which they have communicated through these pieces which is the reason that it works so well. “Tape Pieces Vol. 2” is currently available as a Pay What You Want Download and you can get both cassettes as a generously priced bundle. Totally recommended.